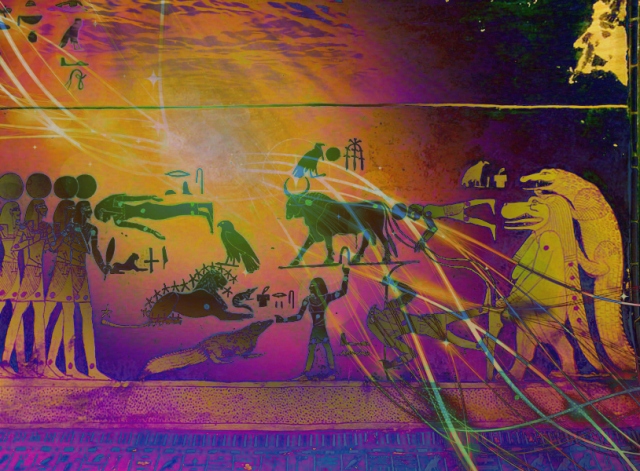 My tomb is on this shore,
in the place where the earth is swallowed by the sky;
His nakedness is covered by Her imperishable stars
for the eyes of swallows ascending the western vault.
And my nakedness?
His loins are awakened by the flowers of the sky;
beaten gold and ruddy copper flash as His girdle,
growing from a garden the hands of the Gods have planted;
cornflower and lotus unfurling their bright petals,
lighting a lamp before him
in the darkness of the desert’s edge.

I call on the Lord of the Rivers
to meet me by the water’s mouth;
Sebek Who is in the Water,
the Great Crocodile beautiful of forms;
who tears the sky with His double plumes,
appearing in the east as the Lord of Bakhu-Mountain.
This mountain is my destination, the sky rent above its peak;
and it is this crocodile of flashing white teeth
who makes a gap for my wings to enter.

My tomb is on this shore,
at the junction between the earth and sky;
He beholds the entourage of jabirus dancing
in their pilgrimage through that torn and glimmering veil.
And my pilgrimage?
His dance is the ascension of lamps in heaven’s lap,
whose yawning places him at the gate of a stellar home;
the tireless stars of generations hailing,
making of their song a guide for the wings of souls.
I answer when my ears of twilight are opened,
and my mouth breathes the breath the crocodile has woven.

I call on that Crocodile great of terror
to meet me by the desert’s mouth;
Sebek Who is Ruler of the Desert Edge,
whose teeth and claws reveal the flashing of the sun;
He coming on the dark waters to predict light,
crossing waterways as the sky flees His shadow.
These waterways are my destination, this Shadow my guide;
and I am brought up by the One Who Flies to the Skies,
who makes the starry vault a road for my wings.

My tomb is on this shore
in the place where the earth gives way to the sky;
His nakedness is revealed as the pathway of stars
for the eyes of herons rising on the eastern ladder.
And my nakedness?
His brow is crowned by the crest of the sky;
striking flame and sun’s eye are His mantle,
shooting forth from a horizon the Gods have opened;
thigh of bull and crocodile’s tail unveil their power,
lighting a lamp before Him
in the darkness of the sky’s edge.